The Vernon Masonic Lodge, Coleraine was the first “named” Lodge when constituted under warrant No. 123 from the Grand Lodge of Ireland on 8th May 1741 (other Lodges only had warrant numbers). As the first minutes in  "No.1 - Vernon Lodge Book - Minutes" relate to 18th January 1750 the early history of the Lodge is not recorded or was recorded in a minute book that no longer exists.

However from R.W. Bro. Keith Cochrane’s research we know that the extant Grand Lodge Register records that it would appear that this was not a Warrant for a new Lodge but for one already in existence. "Time Immemorial" Lodges were ordered by Grand Lodge to apply for Warrants "or they will be proceeded against as Rebel Masons". (Faulkner's Dublin Journal 1 July 1740)

Early records of the Lodge are in a fine state of preservation and are still in the possession of Vernon Lodge No. 127, Coleraine.

These old records contain the very earliest references to the Royal Arch Degree, yet discovered, in a Lodge Minute Book and the Lodge worked as well in the Royal Arch, the Knight Templar and Rose Croix Degrees, under the Craft Warrant.

From records relating to membership it can be assumed that some of the founding members of Lodge 123 in order of seniority were Domnick Heyland, George Cary, Alex McKachan, Will Kinkead, Andrew Todd, Robert Giveen Jnr and Robert Wilson as all have a date of joining Lodge 123 of 8th May 1741.

It would also seem likely that Dominick Heyland was the first WM as his is the first entry. Also the Lodge jewels (WM and Wardens) were presented to the Lodge by W.Bro. Heyland in 1747 as they are inscribed as such and the jewels are still worn by the WM and Wardens of Vernon Lodge, No. 127, Coleraine. Plaques relating to the life and death of the Heyland family can be found on the walls of St. Patrick’s Church, Coleraine.

The photographs below show the reverse of the WM’s and SW’s jewels depicting the workings of the Royal Arch, so although the earliest minute relating to the Royal Arch is dated 16th April 1752, “At this Lodge Bro.r. Thos. Blair propos'd Samson Moore a Master & Royal Arch Mason to be admitted a member of our Lodge “, we know that the Royal Arch was practiced prior to 1747 in Vernon Lodge, Coleraine. 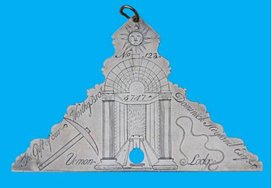